Please comment on the discussion page. If you want to make changes to the statement itself, please do that at Mission Statement/Public version.

Let's ramp up the intelligence of politics

An open letter to the political blogosphere

"For more than 50 years now, we have been living in the era of television politics. In the 1950s television first began to have a major impact on politics, and the results were overwhelming.

Campaigns have been more about getting the television messaging right, the image, the soundbite, than about engaging ordinary people in understanding and caring how political issues really affect their lives. 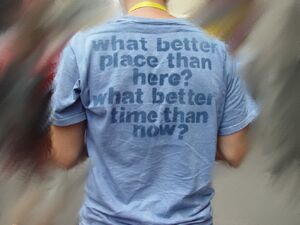 One hallmark of the blog and wiki world is that we do not wait for permission before making things happen. If something needs to be done, we do it. Well, campaigns need to sit up and take notice of the Internet, take notice of bloggers, take notice of wikis, and engage with us in a constructive way.

I am launching today a new Wikia website aimed at being a central meeting ground for people on all sides of the political spectrum who think that it is time for politics to become more participatory, and more intelligent.

This website, Campaigns Wikia, has the goal of bringing together people from diverse political perspectives who may not share much else, but who share the idea that they would rather see democratic politics be about engaging with the serious ideas of intelligent opponents, about activating and motivating ordinary people to get involved and really care about politics beyond the television soundbites.

Together, we will start to work on educating and engaging the political campaigns about how to stop being broadcast politicians, and how to start being community and participatory politicians.

How will we do that? Is it possible? Jimbo, are you crazy?

Ok, I might be crazy. I founded Wikipedia, which is of course about as crazy an idea as anyone might imagine. And you know what? I was not and I still am not smart enough to figure out how to make Wikipedia work. The Wikipedians figured that out, my role has only been to listen and watch, and to guide us forward in a spirit of sincerity and love to do something useful.

So, I will frankly admit right up front: I don't know how to make politics healthier. But, I believe that you do. I believe that together we can work, this very election season, to force campaigns to use wikis and blogs to organize, discuss, manage, lead and be led by their volunteers.

We can turn this into the first beginnings of what is to come. This can be the start of the era of net-driven participatory politics. And it does not matter if you are on the right, on the left, moderate or extreme, socialist or libertarian. Whoever you are, and whatever you believe, you can share with me my sincere desire that the process start to be about substance and thought, rather than style and image.

Here is what to do:

Sign up here on the wiki, and let's start building the knowledgebase to make this happen.

Blog about it, email about it, talk about it, contact your local politicians and help them to get involved. Make a big noise that there is a broad non-partisan effort to making politics smarter, in engaging people at a personal level. Politicians will respond, but they need to hear us demand it, in a big way.

Retrieved from "https://campaigns.fandom.com/wiki/Mission_Statement?oldid=30000"
Community content is available under CC-BY-SA unless otherwise noted.